Ripple is one of the most known cryptocurrencies. It was created in 2012 and it took it 5 years until it finally took off in 2017, going from under $0.10 to $3+. Of course, Bitcoin’s evolution had a massive impact over XRP’s price. But we cannot ignore the fact that Ripple outperformed BTC in 2017, going from less than a cent at the beginning of the year to an unbelievable top of $3+. But what are some awesome facts that you didn’t know about Ripple?

15 Interesting Facts about Ripple and XRP

1.Ripple never had an ICO

You probably never knew this, but Ripple (XRP) didn’t actually had an ICO. They’ve sold the XRP, their native cryptocurrency, to the market – but didn’t had an actual ICO.In fact, XRP has been sold to investors since 2013 and on August 4th 2013, XRP had a price of $0.0059. It took it around one month to reach $0.015, but then it had a one year period when the price was trading under $0.01.

The price of XRP was not really something that the Ripple team focused on. Instead, they’ve put their efforts into creating financial systems to transfer funds from Bank A to Bank B almost costless. But in 2017, when Bitcoin reached $1000 again, a lot of people started investing in Ripple as it was one of the oldest and trusted cryptocurrencies.

3. The first bank to use Ripple was Fidor Bank in Munich

Fidor bank was the first banking client of Ripple, claiming that Ripple is “changing the rules of the game for financial institutions”. Fidor Bank is a German online bank, created in 2009. Being one of the banks created after the financial crisis, Fidor bank had to stay innovative and serve their clients with a high quality system, available even today.

5. Ripple has a 55 Billion XRP in Escrow

6. Ripple wasn’t made to be a payment currency, but can act as one

XRP was not a cryptocurrency created with the purpose of sending fast transaction from person A to person B. But can be used like that. Given the fact that the cost of sending XRP over its network is lower than Ethereum network’s one or Bitcoin’s one, XRP can be used to send money cheap to a friend or even play with it at xrp casinos.

7. Ripple’s network is among the fastest in the world

With a 3.3 average transaction time and a cost of under $0.01 – Ripple’s network is one of the fastest in the world. With a scalability of 1500 TPS, Ripple’s network can be as fast as the Visa network and probably even more cheap. There are a few other competitors in terms of TPS and cost of transactions, but if we learned something from the crypto space is that multiple companies targeting the same market can co-exist. 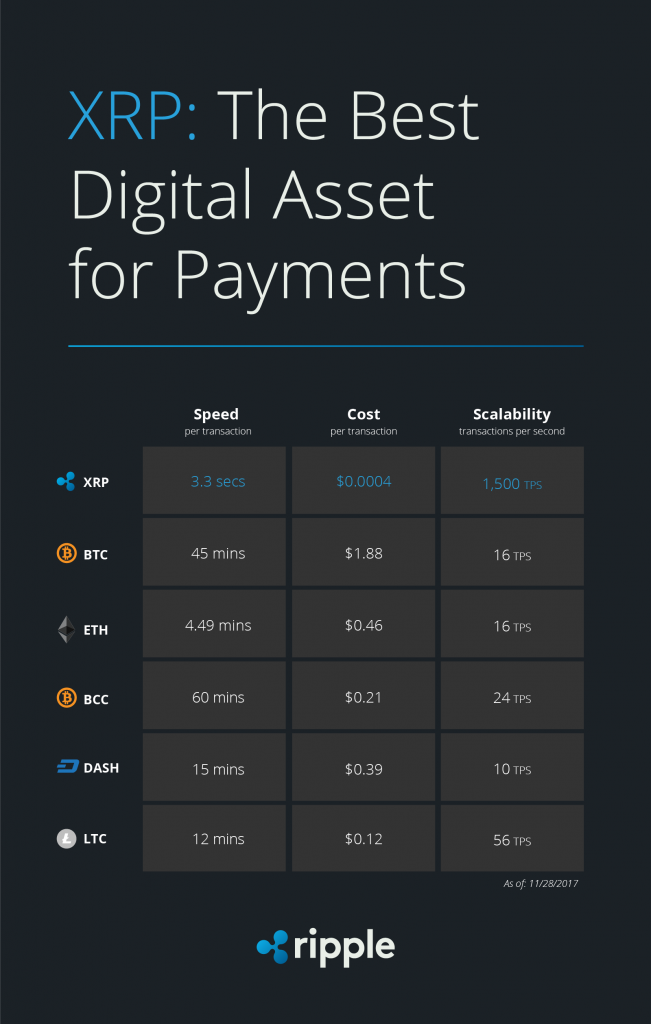 8. The cost of sending a transaction the Ripple network is extremely, extremely low.

As saw in the picture above, the cost of sending a transaction over the Ripple network is $0.0004. Its not one cent, not even a 1/10th of a cent – but lower. And no, the transaction is fixed and it doesn’t modify even if you send $10 or $100 Billion in XRP. Plus, the low confirming time of only a few seconds is a huge advantage.

9. Ripple is not mineable

You may have thought that Ripple is working the same way as Bitcoin, with miners confirming the transactions. But no, Ripple is not minable. The total amount of Ripple are already created, with 45% of them in circulation. The transactions are confirmed on the XRP ledger and anyone can participate there. This is a positive thing about Ripple, as it uses less energy than Bitcoin and other cryptocurrencies. But the fact that 55% of XRP are still on the Ripple Labs wallet – that’s not a good thing for XRP investors.

10. David Schwartz, Ripple’s CTO, actively contributed to Bitcoin’s codebase. The first time he made a commit was on July 25, 2011 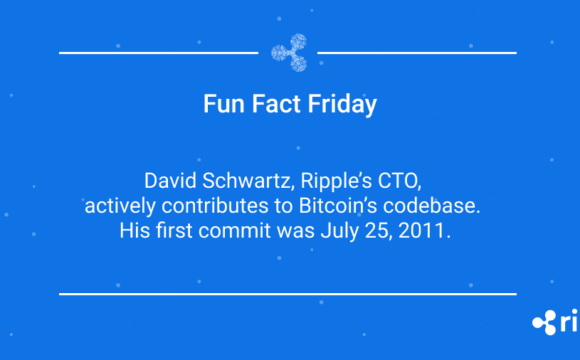 In the recent news, SEC charged Ripple with an ‘on-going ICO sale of unregistered securities’. This was announced just recently and the XRP value dropped a from $0.50 to $0.2 in just a few days. Its unclear today if Ripple will be held responsible, as the person which ‘attacked’ Ripple resigned from his position and was replaced by a more crypto friendly one. However, its an interesting process to follow. If Ripple can prove the SEC wrong, we might expect more banks working in the future using Ripple’s network.

12. More than 300 banks and financial institutions are using the xCurrent system

Brian Armstrong commented about how Eric Yuan, ZOOM’s CEO, about how he got his Visa denied 8 times and he’s not a billionaire. Vitalik took its time to share one of his experiences where he tried to be an intern on Ripple back in min 2013, but the US Visa complications didn’t allowed him to do that. Thanks God!

Chris Larsen, the person who founded Ripple Labs, has a 17% share of Ripple. This puts him on the richest people in the world list alongside well known names as Jeff Bezos or Bill Gates. But the thing is, his fortune is tied to how well the company is doing and their token, XRP. Which right now, its not in such a good spot.

There’s a really small percentage of users that hold a large amount of XRPs – compared with Bitcoin, ETH or other cryptocurrencies. It might be due to the fact that Ripple continuously decreased since the 2018 $3 top or that the CEO holds a large amount of XRP that he can sell almost any time he wants – either on market or OTC.

We hope you enjoyed our Ripple facts article and hopefully you learned something new about Ripple, XRP and other things.

TRASTRA Card - Your ideal solution for cashing out Cryptocurrencies