As cryptocurrencies gain legitimacy in the world of decentralized banking, options for everyday purchases via digital wallets expand. From online marketplaces designed to handle crypto transactions to investing in the New York Stock exchange, industries across the globe are shifting toward digital currencies.

In the US, major sports leagues are one such sector that’s pivoting toward crypto. In recent years, NFL stars like Matt Barkley to Russell Okung began requesting paychecks in Bitcoin from their franchises. Meanwhile, the NBA’s Sacramento Kings went big with crypto offerings as early as 2014.

For the average sports fan, digital wallets and crypto debit cards may not mean much—but, two years ago, neither did sportsbooks. With the sports industry overhauling to accommodate oddsmakers and cryptocurrency, change is on the horizon.

For the time being, offerings remain slim for the sports fan with crypto preferences as groups work to catch up with blockchain platforms. Here are the US’s top options for those looking to spend on sports.

With companies like Deloitte weighing in on the future of Bitcoin and sports stadiums, it’s only a matter of time before more sports franchises look to sign-on third-party groups to improve technology from the grandstands to the sidelines.

As we mentioned earlier, the Sacramento Kings first opened the door to Bitcoin and blockchain in 2014. Visitors to the Golden 1 Center can use digital currency to make purchases at the team’s merch store and buy tickets—though options will soon expand.

At the moment, many partnerships between crypto and sports franchises relate to in-stadium advertising. The Cleveland Cavaliers currently advertise for UnitedCoin, as does their eSports team, Cavs Legion.

However, partnerships like the 2019 merge between Miami Dolphins and Litecoin allow for advertising, as well as 50/50 raffle ticket purchases. The year prior, the Dallas Mavericks became the second NBA team to accept Bitcoin—though they allow full purchasing power in the American Airlines Center rather than merchandise alone, like the Kings.

Though certain oddsmakers are starting to open up to crypto, the going is slow. Not only are crypto-users in the minority, but in countries like the US, oddsmakers are still subject to tedious legal expansion into new states because of complicated regulations.

For such locations, a leading sportsbook prioritizes creating a diverse range of sports wagers for punters rather than linking digital wallets. Or, at least for the time being—especially given the US leads the world in crypto investments, according to Biditex.

For now, the US’s most popular and lucrative sportsbooks don’t offer crypto wagers despite the growing popularity of crypto in sports leagues. In England’s Premier League, the shift toward crypto may lead top sportsbooks abroad to expand their offerings for crypto users. However, the US is more likely to expand digital currency offerings in stadiums and for online ticket purchases. 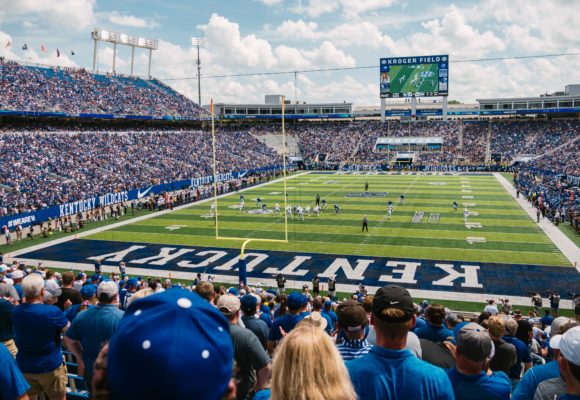 Much like the Miami Dolphins utilize Litecoin for their 50/50 raffles (which see half the proceeds go to charity), certain franchises are adapting to crypto in creative ways. In 2018, the LA Dodgers launched a crypto-giveaway.

The first 40,000 fans inside the stadium received a token that could be used for a digital bobblehead. Recipients could then deposit the bobblehead into their Ethereum wallets, which signifies one creative way for sports to engage with fans via crypto.

Looking ahead, US sports leagues are likely to adopt successful practices from the Premier League. As mentioned above, the UK football league hasn’t been afraid to embrace digital currency.

In recent years, teams like the Wolverhampton Wanderers and Arsenal are signing big-money deals with currencies like CashBet Coin and eToro, much like the Cavaliers. The deals have seen places like Emirates Stadium and even uniform sleeves rep the brand of up-and-coming currencies looking to make waves in the sports world.

However, US sports leagues may jump past official partnerships like those mentioned above. By integrating crypto payment platforms like Utrust or Coinbase in order to cater to various currencies, from Ethereum to Bitcoin to the Ronaldinho Soccer Coin.

Once such technological infrastructures are implemented, it’s likely most stadiums will cashless, with debit and credit options coexisting alongside digital wallet platforms.