If you’re a gambling enthusiast, you’ve probably heard about the amazing world of bitcoin slots. The thing is, the process its easier than depositing with your credit card – you have a certain level of anonymity and the game is as fun as always. 1xBit is one of the best bitcoin casinos, even though they don’t offer their clients free spins or no deposit bonuses.

We’ve played over 50 slots from 1xbit and we’ve tried to select the best slot games to play with your bitcoin. As mentioned before, this is not a casino that offers free spins or no deposit bonuses – but you can also play with the ‘Play money’. Probably the thrill won’t be the same but at least you won’t lose any money, nor win any. If you’re interested in more about 1xBit – check our our 1xBit Review.

Pirate Gold is among my favorite games from 1xBit. It has everything I want : the ability to play on multiple lines, to enjoy a few great special games and multiple special games. Your odds on winning on this game are better than a normal one – but still, you need to remember this is a casinos and they need to make money. So don’t hope to get rich playing this type of games, even if Pirate Gold game says that you can win as much as 32,270 x your bet. There are 4 lines with 5 columns and 10 paying symbols. Therefore, the chance to win each hand is pretty decent.

There are two types of specials. First of all there are the Lucky bags. Whenever you get 8 lucky bags on the screen, the first feature will start. When the feature start, there won’t be any symbols except free spaces and lucky bags. This time, each lucky bag that fills an empty space will mean money that will go straight to your balance. You have 3 respins and each time a bag comes into an empty spot, you will get to 3 spins again. This is not a cumulative bonus. If you spin and get another bag from the first try – you will have 3 respins again, not 5. But still, its pretty fun. Here are two examples below with what you can win from this bags. I played on a $5 bet and on this feature I won around $400. 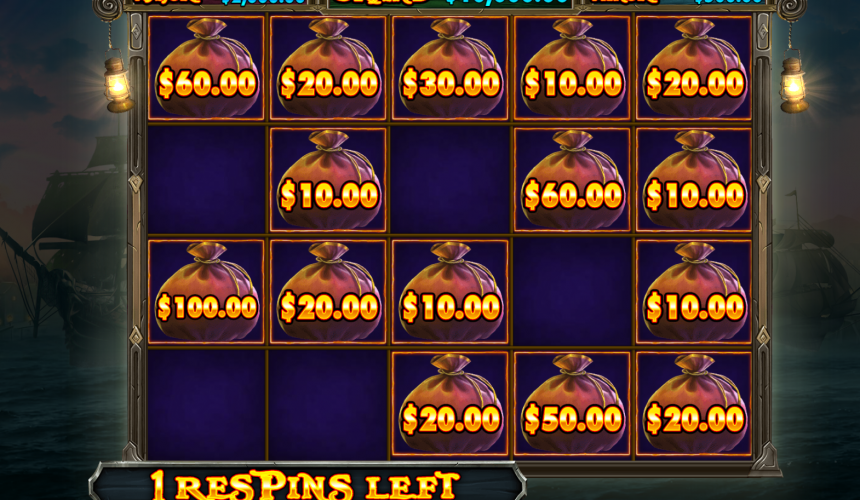 The second one wasn’t as good as the first one, but there’s still around $250+ in earnings – so a 50x compared to my bet. The nice part here is the fact that you can get a multiplier symbol – from 2x to 5x and also a retrigger symbol – which means you get an additional round of free spins. The game is pretty good, now it all depends on your luck. You may get super lucky and get like 1000x your bet or you can lose it all. 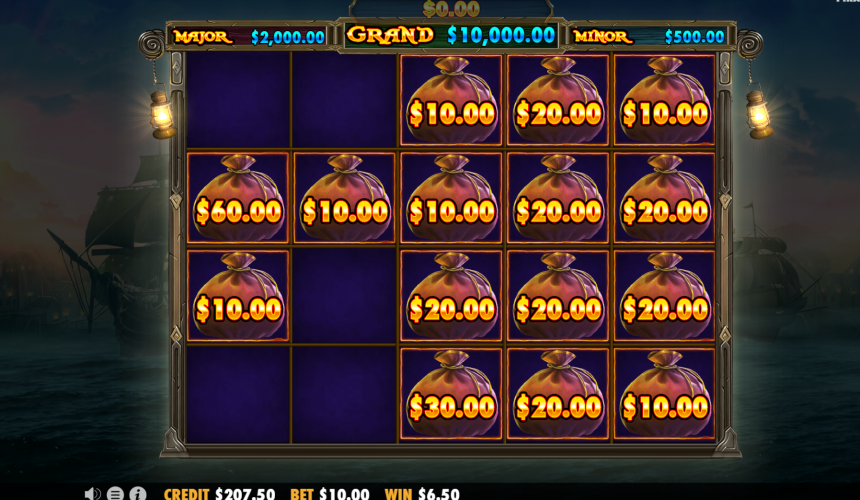 Another awesome thing is that you also have a feature where you can get free spins. You get 10 free spins for each 3 bonus symbols from the screen. Playing on $5, I got a $337 win in 20 free spins. That’s not a great result but its not a bad one. The best thing? You can get the lucky bag feature in this special too. So your chances to win are multiplied. 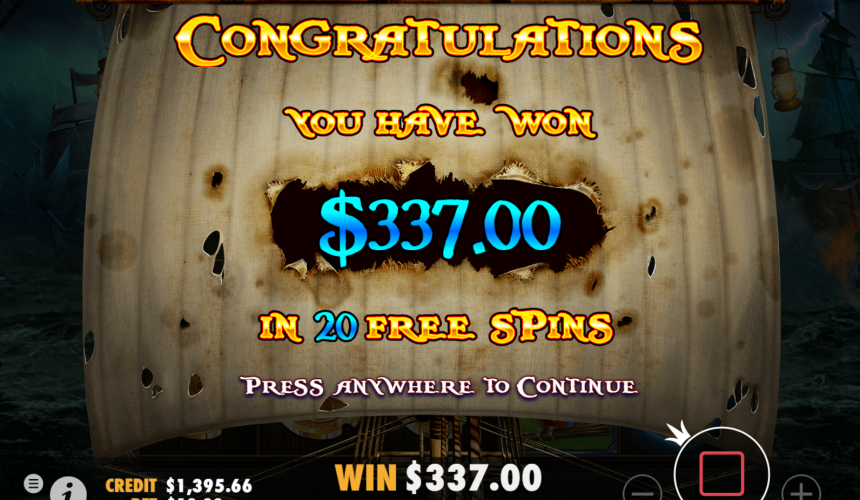 This game is almost the same as the classic Book of Ra. The only difference is that the paytable is a bit lowered compared to the original one. You might notice here that if you get a line of Qs or Js – you will receive about 10% less than on the original Book of Ra. What I like about it though is the fact that there are only 9 symbols and the scatter which is also a wild. So basically, the odds of getting a line here are better than in a game with 10 symbols or more. 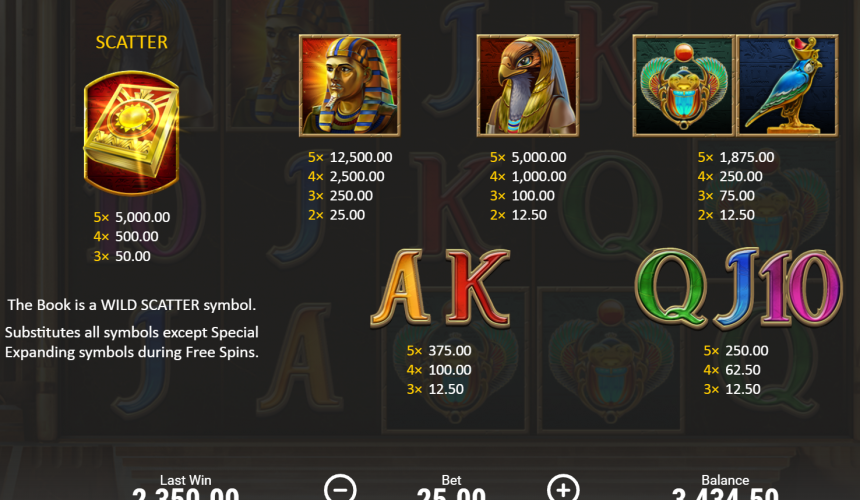 The special feature is the same as the Book of Ra classic one: you need to get 3 scatter symbols anywhere on screen. Once you do, one of the symbols will be picked and each time it will appear during the feature – the whole column will be replaced by that symbol. Basically, if you get a pharaoh on each column and the pharaoh is the feature symbol, you would get the maximum win possible – 10 lines x bet per line x payout for 5 pharaohs. 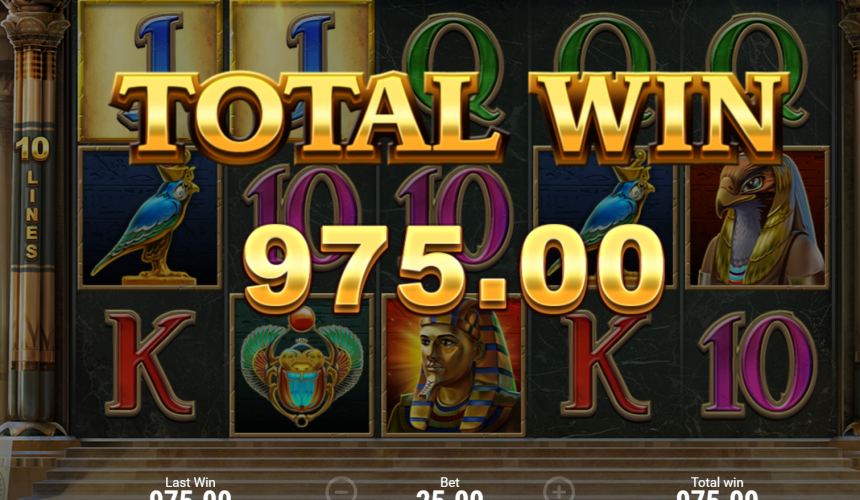 The best thing about this game is that the feature can last longer if you get again 3 cards in the feature play. For the start, you’d have 10 games but if you get an additional 3, you’d get 10 more games and so on – depends on your luck. I never managed to see more than 60. The fact that there are 9 symbols and you only need 3 scatter to get the special makes this game so fun and playable. Also, there’s the fact that the scatter can be dropped on any column – you don’t have any restriction like on different games. 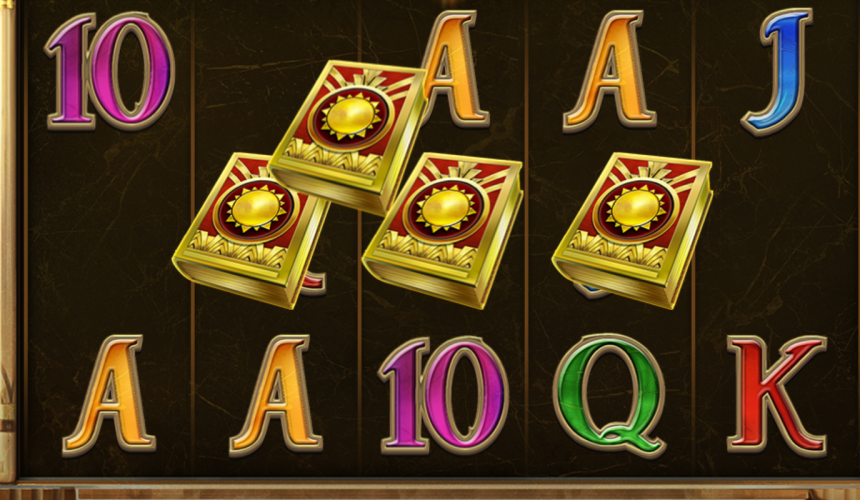 The winnings are pretty good also. Book of Sun is a great bitcoin slot game from 1xBit that you can try and play for as low as 0.20 mBtc per hand ( $1.76 USD). Though this seems a bit pricy, the chance to hit a good feature and make 2x of your deposit is quite good. For example, I played here with $500 and $25 bet per hand and I hit a bad feature where the pharaoh was the symbol. Even though, I managed to win $2,350 – so almost 100x the bet per hand. 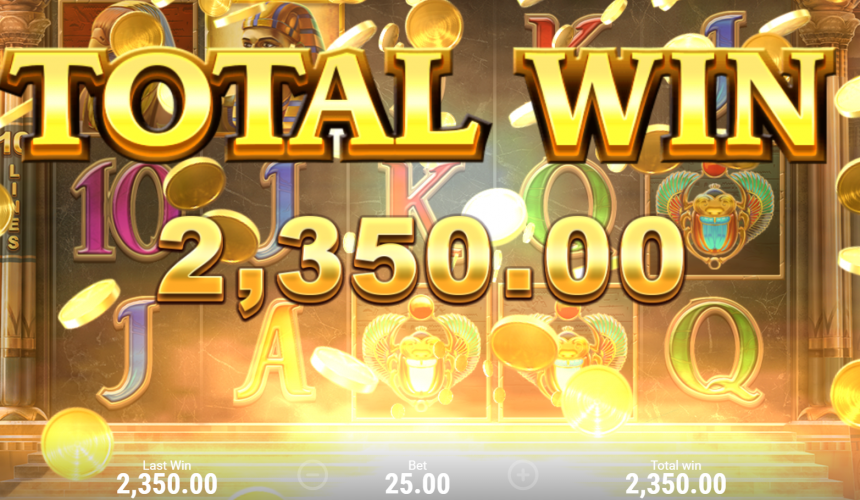 Book of Sun is a great game to play and you have pretty good odds of winning a bit here, but its also risky and you should only play with what you can afford to lose. If not, just try and play on ‘play money’. Until all, its a fun game but gambling is still gambling and you should take care of your financial situation. Anyway, Book of sun is among the best slots games that you can play with Bitcoin.

Dragon Pearls is very similar with Pirate Gold. Both are great bitcoins slots that you can play on 1xBit – and both have the same game type. The difference is, Dragon Pearls have 3 rows with 5 columns. There are two feature that you can get. For the first one, you need 3 scatters on the reels 2,3 and 4 only. This will gave you 8 free games with 7 symbols only. This means that A,K,Q,J will not appear in this feature – so there are better odds to get a good payout. I got a 1068 pay on a bet on 60 in a normal game – imagine if this would have been in a feature game. 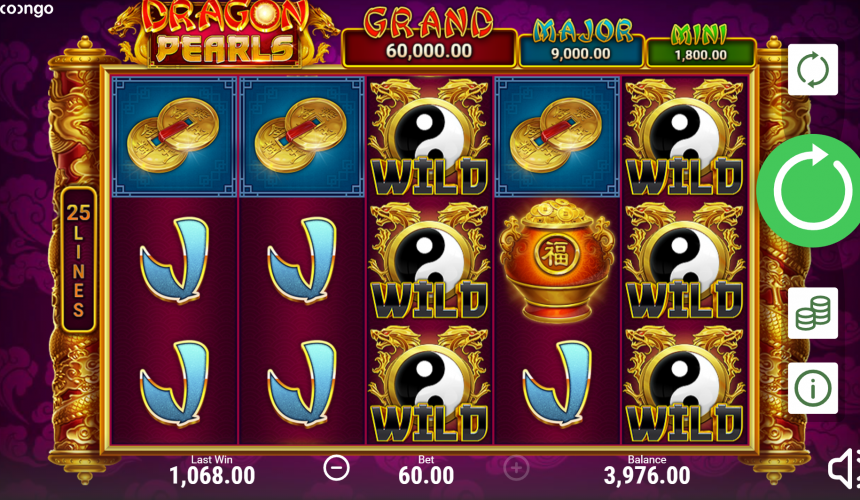 The feature with 8 free spins have also another advantage. You can get the secondary feature which is basically the same as the Pirate gold one. But this time, you’re not waiting for 8 symbols but only for 6. As soon as 6 bonus symbols are on the screen a free game will start where you’d get 3 free spins each time a bonus symbol will get fixed on a reel. The spins are not cumulative – so there’s always a maximum of 3 spins. The game finishes after the 3 spins are done or when the all 15 symbols are on the screen and you get the grand jackpot. When the game is finished, the amount is summed up and paid to the player. 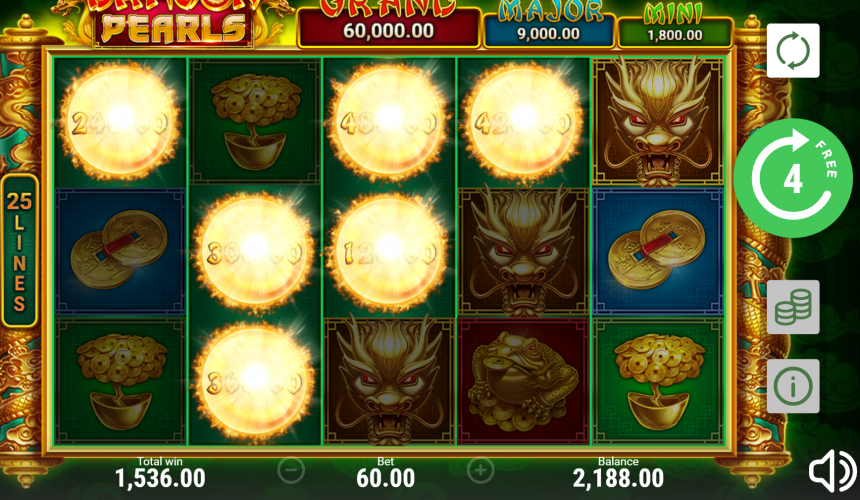 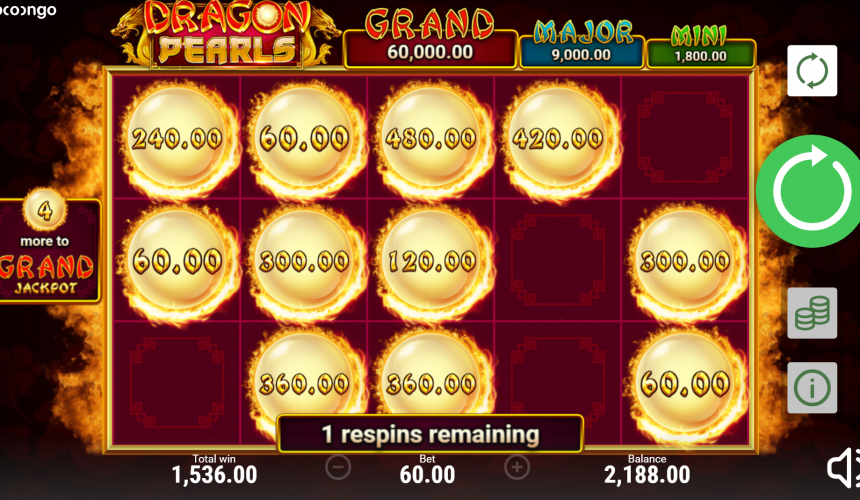 The game itself is pretty fun and due to the fact that there are 2 feature plays and that you also have a jackpot makes it more interesting for the slots players. Personally, I was getting 2-3x of my funds deposited to this game – but I was loosing on other games. Its a fun game to play and the payout is pretty good. For example: On a bet of 60 play tokens I got a win of 4212 – more than 70x the best that I was playing. This is one of the best bitcoin slots due to the fact of the many ways that you an win on it. 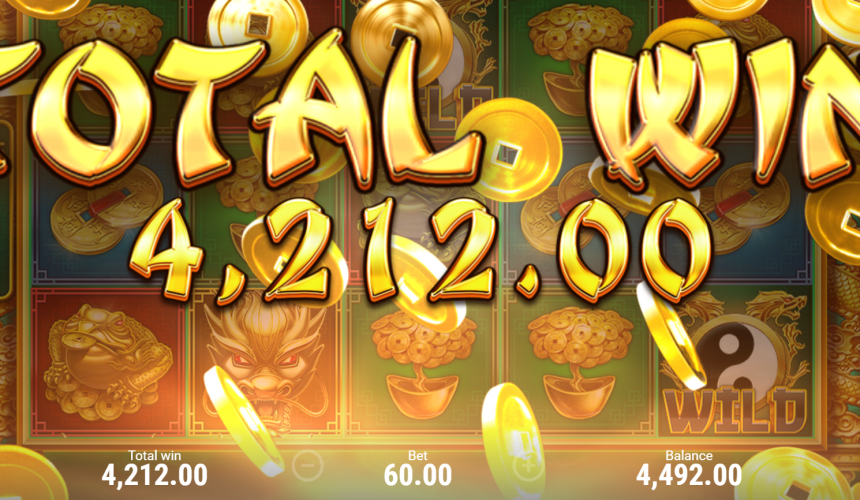