Bitcoin Cash (BCH) shows a slowing of bearish volatility after a prolonged fourteen-month price plunge. This week we’ll be carrying out our usual top-down analysis of the BCHUSD and look out for clues that highlight long term trend reversals and opportunities to HODL. Visit Cryptocointrade for more crypto technical analysis. 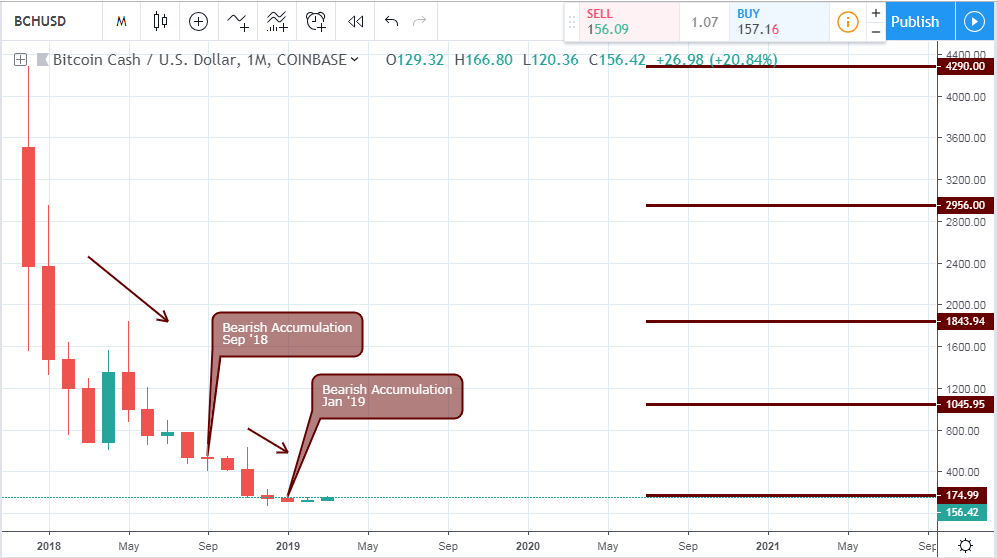 There’s no sign of a switch in trend polarity as the monthly chart maintains a strong bearish outlook from a series of bearish closing candles starting from December ’17.

The bears showed they were not taking their legs off the pedal by firing a bearish accumulation pattern on September ’18. A more recent pattern formed on January ’19 shows a probable continuation of the bearish trend. 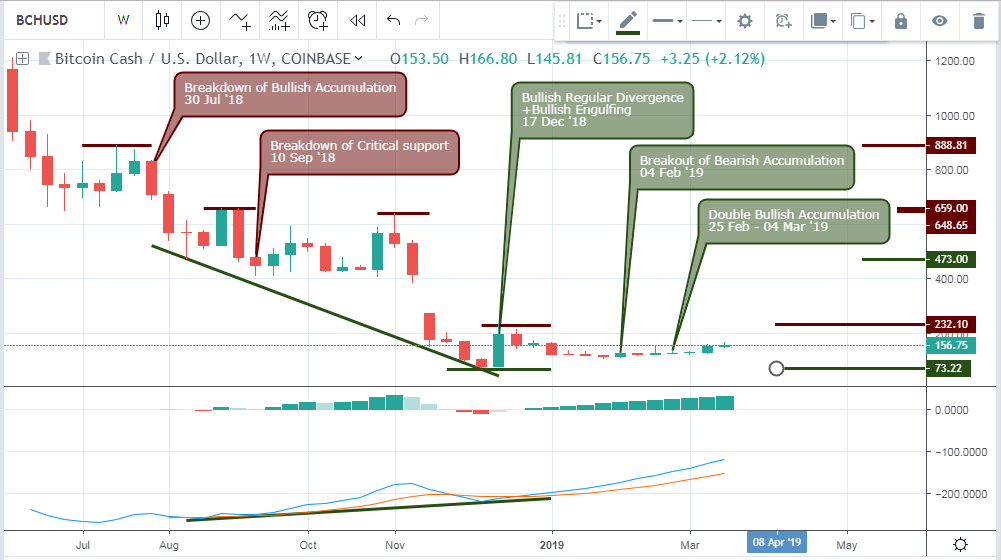 Moving a step lower on the time scale, the weekly chart shows a buildup of technical patterns that led to the bearish price descent on the monthly chart.

First, with a breakdown of bullish accumulation on 30 July’18, the price went on to close below a critical support level as price dipped by a total of 88%.

The bullish engulfing pattern formed on 17 December ’18 was confirmed by a double bullish accumulation pattern that lasted from 25 February to 04 March ’19. This gave confidence to the bulls as they move closer to the 232.10 resistance. 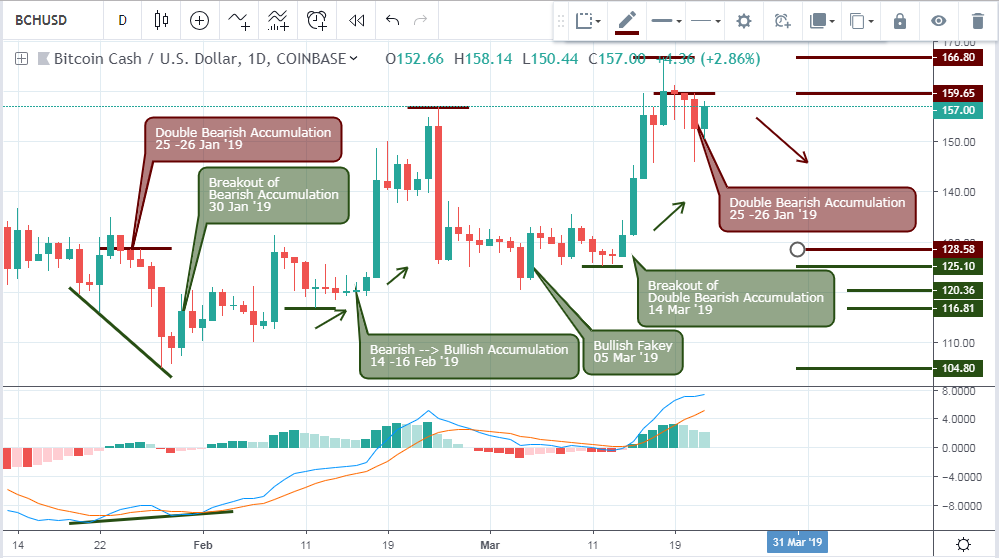 Fast forward to 16 February ’19, a switch from bearish to bullish accumulation for a 27% price surge was initialized, and the second breakout of double bearish accumulation on 14 March ’19 for another 28% target. 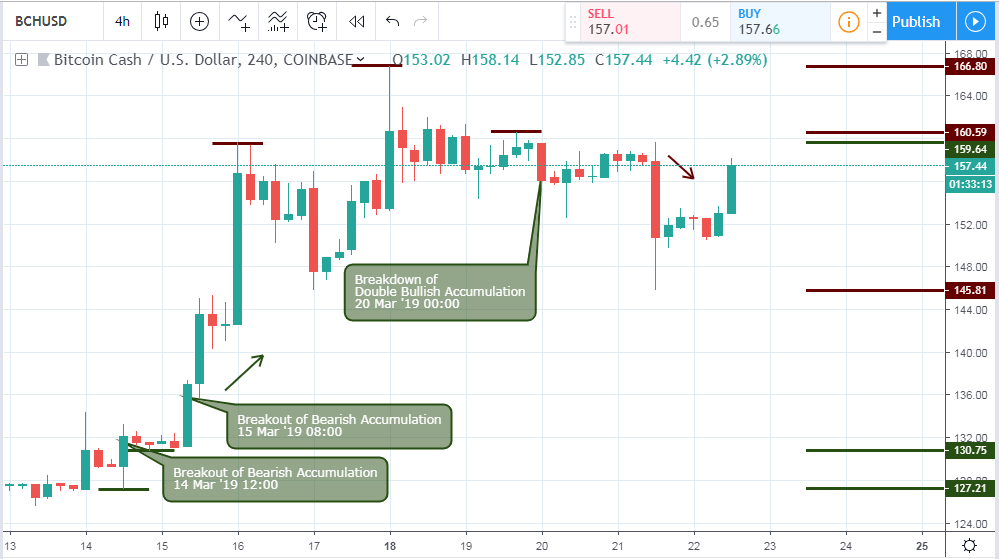 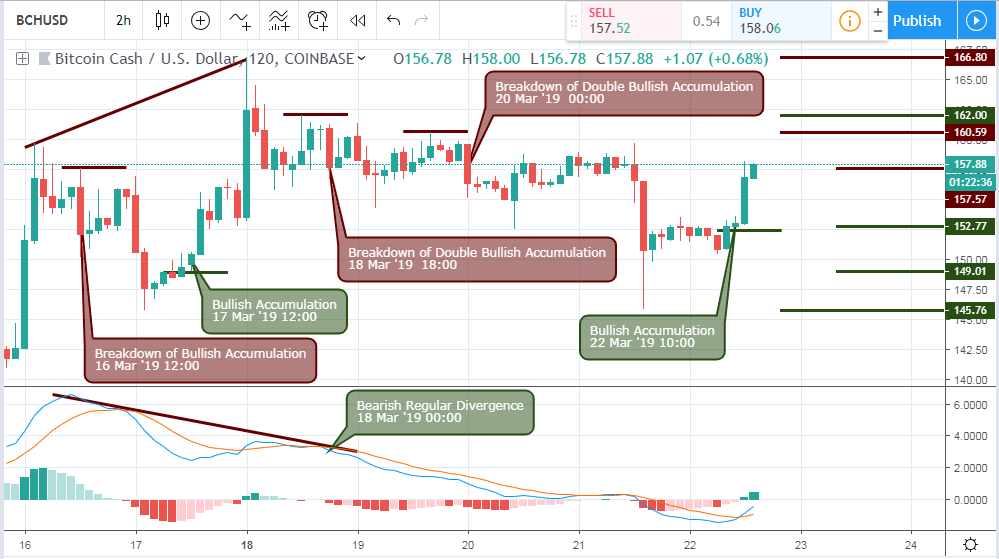 With price and oscillator being out of alignment in what is known as a divergence pattern, the price started a bearish decline after confirmation from a breakdown of bullish accumulation on 18 March ’19 18:00 and 20 March ’19 00:00.

A most recent pattern on the above chart is the bullish accumulation pattern which shows indicates a comeback of bullish sentiment, setting up support at 152.77.

Based on the recent price patterns analyzed from the weekly chart, down to the 4hour chart, the price of Bitcoin Cash is projected to reach the 232.10 resistance level as a major take profit target and may extend beyond the level. Further hawkish fundamental announcements in the crypto industry may boost investor confidence and consequently the price of the BCH.

5 Best Apps For Trading Cryptocurrency On The Go