Here are the most important cryptocurrency news of 12th December 2018:

Right when Bitcoin had another fall, the volume on SIX Stock Exchange for the HODL ticker started to grow again. The ETP is a fully collaterized and non-interest-paying bearer debt security. In the ETP – Bitcoin have the larger percetange with 48%, Ripple (XRP) is the second one with 30%, Ethereum (ETH) with 17.6% and two smaller shares of Bitcoin Cash (BCH) and Litecoin (LTC). The ETP is not a subject to the Collective Investment Schemes Act (Cisa) and not supervised by Finma.

What’s interesting about the recently created ETP was the record trading volume of 53,233 shares and 62,986 shares traded on 6th December and 7th December.These trades represent a massive increase since the monthly average of 20,000 shares traded per day and they also happen in the same time with the Bitcoin fall. Su Zhu, CEO at FX Hedge Fund, declared that ” “correlation between volume and price continues to be very strong at -68%.”

Last Thurs and Fri we broke volume records again on the Swiss HODL ETF with 53,233 shares and 62,986 shares traded respectively. That coincided with the dip in BTC to 3.2k and ETH to near 80. The correlation between volume and price continues to be very strong at (-68%). https://t.co/Meuaa9MXCV

He also notes that there’s a negative correlation between the volume and the price of the HODL ETP. The ETP’s volume increase as BTC price decrease and decreases as the price rises. 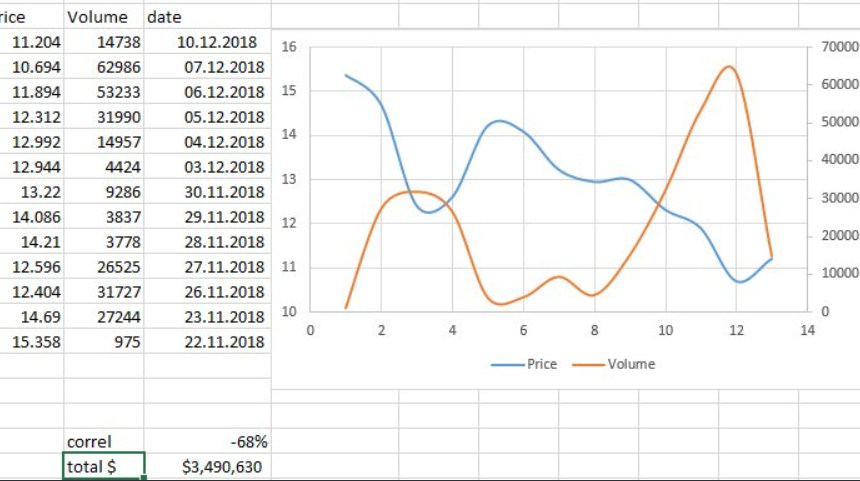 And there’s more great news, it appear that the ETP buyers are mostly ‘hodling’ and accumulating, rather than trading:

After a tweet by Joseph Young who claims that Coinbase may be anti-XRP as they have not listed it yet, Binance CEO – Changpeng Zhao – decided to express his oopinion too.

The court case may take years. But if XRP is ruled as a security, it would seriously hurt a lot of US users, and to a certain extent, other users around the world too. It certainly doesn't look like a security to me, but that's just one person's opinion.

As any XRP hodler should know, Ripple is right now involved in a class action lawsuit that is set to take place in the federal court. The U.S. Securities and Exchange Commission (SEC) will decide if XRP is a security or not. Ripple’s executive team has explained so many times why they believe that XRP is not a security and wasn’t at any point in its existence.

CZ’s opinion just add more power to the Ripple’s team declarations. His opinion may be right, but the XRP issue wasn’t solved yet. SEC has been really ‘quiet’ about cryptocurrencies lately. What we know so far  is that BItcoin is not a security and Ether looks like it is not a security for now. Moreover, any ICO token is likely to be a security. And now, there’s time for the Ripple to be analyzed. SEC are currently waiting to see the result of the lawsuit. This process could take months, if not years.

This process however should have such a big influence on the Coinbase listing. Coinbase can make XRP available for the users from other jurisdictions ( such as Asia) until a regulatory clarity could be set in U.S. too.

IOTA Preparing For The ‘Coordicide’

IOTA is preparing to destroy its central node in order to reach their goal – total decentralization. The process is called a Coordicide – as the main coordinator of the network will be destroyed. The solution was proposed a few weeks ago and the team is moving forward to be ” the first project that fulfills Satoshi’s vision but without mining” :

It's finally out. The #IOTA foundation has a specific solution for the coordicide. The centralization in IOTA will be gone pretty soon. Which then (if everything works as intended) makes IOTA the only and first project that fulfills Satoshis vision, but without mining, in 2019.

IOTA is now using a proof-of-work (PoW) algorithm that prevents any attacker from processing more than one-third of the network’s hash power. But the main coordinator needs to die in order for the network to be fully decentralized. And the team estimates that in 2019, that will take place and an alternative security mechanism will take its spot. There are no information yet about how the coordinator will be replaced, but their blog post consisting of four parts explains why its necessary to let it go and move to a better  solution.

Finance Magnates reported December 12th that Kraken Cryptocurrency Exchange is thinking about a private offering to high net worth investors. The company, which is currently subject of a lawsuit regarding BCH hard fork, has valued its shares at a $4 billion amount. Right now, only people that have receive an invitational email have a chance to acquire equity. The minimum they can purchase is $100,000 equity value.

“The transaction process will be done by a 3rd party service, who will run accredited investor checks, facilitate the execution of transaction documents, and the funding of your investment,”

The people interest have until December 16th to show their interest and will undergo vetting for eligibility before participating. Last month, Coinbase declined any IPO rumors after its $8 billion valuation. Kraken’s decision shouldn’t be linked with the bear market as the company is making steady profit and solved its support issues.

Holidays are coming and Coinbase is thinking about the less fortunate people. In a partnership with GiveCrypto.com ( founded by Brian Armstrong, Coinbase CEO), Coinbase is offering a $10,000 donation is Zcash (ZEC) to Venezuela’s people of Santa Elena de Uairen. More than 100 families from there will receive $1 USD worth of crypto directly in their cryptocurrency wallets for 3 months. Using those money, they would be able to buy 1-2 kilos of protein or 2 kilos of starches and vegetables. According to Coinbase:

Recipients will come from the networks of Venezuelan families already in GiveCrypto.org’s program with Bonnum.

But why are they giving away crypto and not Bolivar? Most of the families lack reliable access to a bank account. And even so, the currency is highly inflated, volatile and its slowly becoming worthless. Using crypto, people could easily purchase goods that they need for living.

This is the second day from the “12 Days of Coinbase” surprise. We hope anyone would take a little of the few that they have to issue a donation to GiveCrypto.org and help the less fortunate ones.