Here are the most important cryptocurrency news of 9th December 2018:

Brave Browser Is Now The Default One For HTC Exodus

The new HTC Exodus is apparently going full crypto. In order a better space for its users, HTC Exodus will use Basic Attention Token’s browser : Brave. The news were presented on 8th December 2018 by Brendan Eich, the Brave’s Founder.

We are very happy to have @Brave as default browser & to be working with HTC on their Exodus phone: https://t.co/J5WQrqODKa

The first version of HTC Exodus will have a 6 inch display, Qualcomm Snapdragon 845 chipset and it will run on Android 8.1 These are basic things that most of the phones have. What makes it unique though is the cryptocurrency and blockchain featured build in the phone.Each HTC Exodus 1 is a node on the HTC’s blockchain network. It also have a variety of options that allow users to securely store and trade cryptocurrencies. The phone will support BTC,LTC, ETH and ERC-721 Ethereum tokens ( Note: Not ERC-20 Tokens, which are used to create most of the ICOs).

Since July, Brave have over 3.1 million active users with more to join daily. Depending of the HTC Exodus phones sold, the Brave mobile users should grow.But, don’t expect millions of users to join overnight as the model is pricy for a ‘prototype’.However, if it will be a success, we could see a new generation of phones – made for crypto enthusiasts.

Ripple is increasing their customer base daily. This year, Ripple reached the number two spot on CoinMarketCap amidst the ‘bear market year’. Carlos Carriedo, the General Manager of Corporate Payments at American Express, said that a blockchain integration is on the company’s agenda. And the blockchain that he’s talking about is no other than Ripple’s one:

“Blockchain is absolutely an option we’re looking at. Just to give you a sense, we have invested in a fintech lab based on blockchain technology, just to understand how to leverage this better…We did a test, partnering with Santander locally, and with Ripple to just do cross-border transactions…And in a matter of seconds, through this test, our clients were able to transfer funds in a very transparent and seamless way, from one part of the world to the other one.”

As you’ve probably read before, Ripple and three other parties are planning to create a “Blockchain For Europe”. Initiatives like this makes people’s interest in Ripple grow. And with a bigger interest, more companies would join their network in order to reduce their actual costs. Carriedo spoke again regarding the future of payments commenting:

“There is more to come. There’s still a lot of things that need to get addressed with blockchain as a technology. But it’s very promising…The future is definitely digital. Digital is the way payments will continue to be across both the consumer part of the business the commercial part of the business”.

Cointext is a cryptocurrency special wallet that allows users to send Bitcoin Cash (BCH) through SMS.The Bitcoin Cash wallet services was just launched in Ukraine and Italy. The advantage of this wallet is that it works on any smartphone and on basic feature phones. The wallet offers the possibility to send Bitcoin Cash without an internet connection.

With Ukraine and Italy added, there are now 35 countries where CoinText can be used. The app doesn’t require a registration and everything it takes to use the apps is a text command. The Cointext founder and CTO, Vin Armani, explained:

“Cointext allows anyone with a cellular signal to access cryptocurrency — This includes all brands of smartphones and about two billion people with basic feature phones,”

Ukraine is experiencing political instability and Italy is facing a sovereign debt crisis. Cryptocurrency provides residents with a way to opt out, and Cointext provides them with the easiest tool to begin using cryptocurrency.

To use it, any person from the accepted regions should locate their access number and use the service. The user should send the text “receive” to the access number to receive a fresh BCH address. Users can then send funds to another address or read the wallet’s balance by a few text commands.

Another Ukrainian instantly transacts #cryptocurrency without Internet using a Nokia 3310!

Are you ready to spread adoption? pic.twitter.com/5iZTppby5M

This is an awesome feature with a real use case, a use case that many people can use it. Working on the same way as Mpesa – the thing they need to do to move forward it to increase the adoption of this great idea.

29% of Freelancers Would Accept Cryptocurrency Payments

In a study created by Humans.net, 29% of more than 1100 freelancers that are active on the platform would be willing to accept cryptocurrency as a compensation for their services. Most of the Humans.net users are located in United States, so the data comes mostly from freelancers working for a high wage. Probably if the study would  have been made on Fiverr, the statistics could be much higher. 825 people of people ( almost 75%) said they heard about crypto and are familiar with the subject.

According to Humans.net, cryptocurrencies are identified as having a lot of benefits such as international payments, no middleman, security, low commissions or transparency. 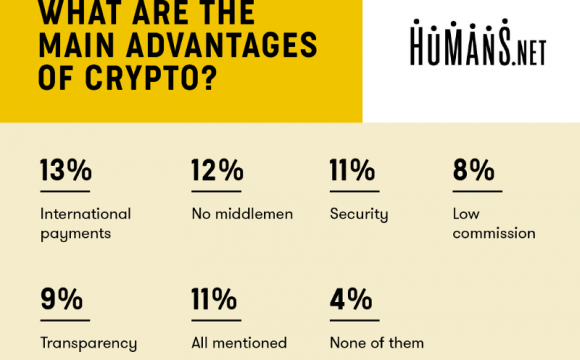 These are good news for the cryptocurrency freelancer as the mainstream adoption could be right around the corner. Companies like Fiverr, Upwork, Humans.net could accept cryptocurrency payments as well as allowing cryptocurrencies withdrawals. The one thing they shouldn’t forget is that this should be done properly – not by adding extra fees to the system. In a study made by LendEdu in 2017, the cryptocurrency owners numbers increased in 2018 compared with the 2017 one. At the end of 2017, only 14% of the persons asked declared they owned cryptocurrencies. In a new one made by Humans.net, over 38% of the people said they currently have an amount of cryptocurrency.

With the cryptocurrency adoption by the freelancing industry, more people from countries with tough financial conditions could earn a living. Freelancer from Venezuela for example, could keep their money safe from inflation by storing them in a certain cryptocurrency in a wallet.

How Will Bakkt & Bitcoin ETFs Influence The Cryptocurrency Industry