The upward growth trend of dApps under Tron has continued in 2019. In the first week of the year, Tron has managed to add 20 new dApps.  Despite Tron being a young platform, it’s top dApps have surpassed Ethereum’s in usage. Many are easy to build and access. Most of the dApps under Tron are gambling focused. Based on metrics like users, volume, transactions and many more, here are the hottest Tron dApps in 2019. 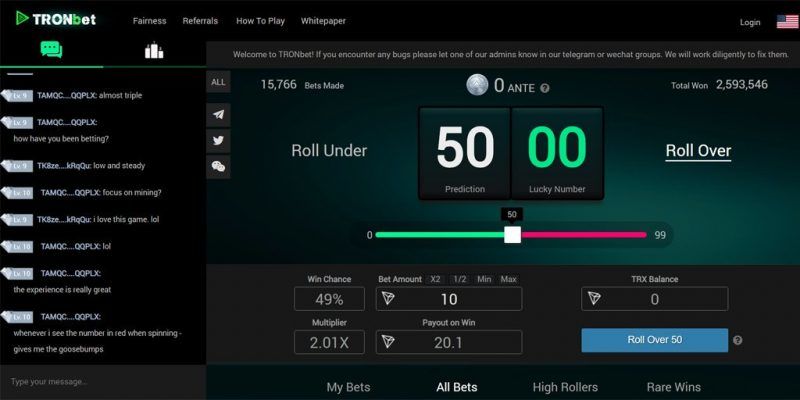 TRONbet caused a buzz among gaming enthusiasts when it was launched in October 2018. The Tron Foundation project managed to register 10, 000 plays on the first day. The platform was faced with a number of issues such as transparency and security. However, going into 2019, TRON bet is set to continue thriving as developers have managed to fix all challenges encountered.

In the first week of 2019, TRONbet registered a high of 2,510 users while the highest trading volume stood at 541.98 Million TRX. With Tron’s prospects looking good, TRONbet is expected to continue thriving. 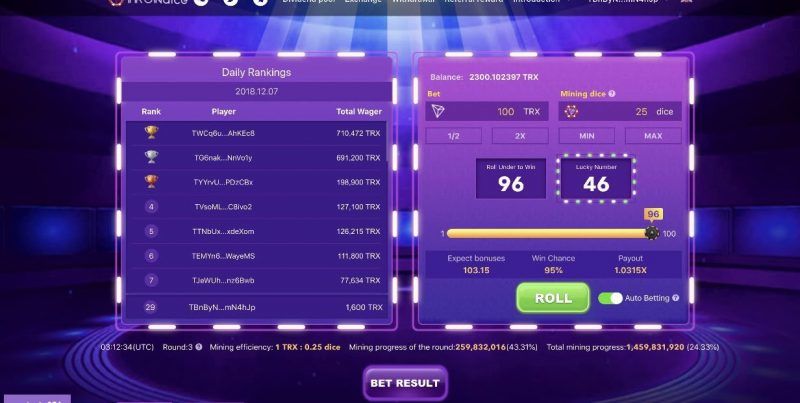 TRONdice is one of the most famous dApps on the Tron network. With over 1,000 active users daily and more than 50,000 transactions per day – this dApp allows you to play a provably fair game of dice. The thing that makes TRONdice special is the fact that it offers dividends for staking their own dice token. The dividends however are paid in TRX and are distributed 24 hours after the 00:00 UTC daily snapshot.

By staking 100,000 dice, you can actually have a return of 2.568 TRX.The TRONdice platform puts 70% of their profit in the dividend pool for its players.Moreover, the players that wager the most TRX daily can win TRX rewards. The first place will be rewarded with 10,000 TRX, the second with 5,000 TRX and the third with 2,000 TRX. A total of 20 places are awarded. More than $500 worth of tron are offered daily for the TRON dice players. 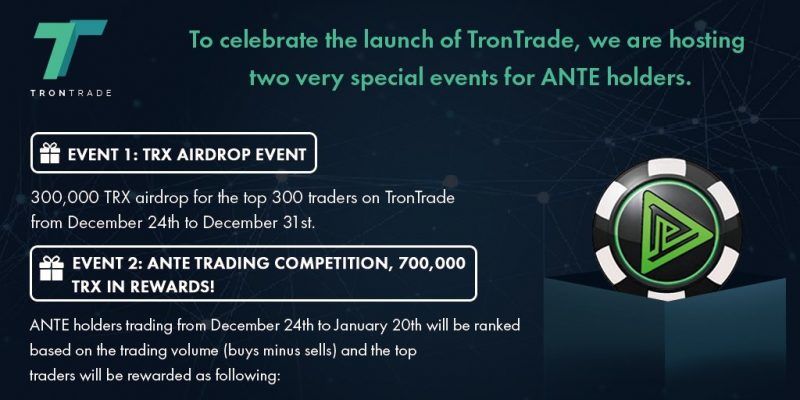 It is the fourth project under the TRON MainNet developed by BitGuild. TronTrade is decentralized trading platform. This dApp launched in 2019 is regarded as a masterpiece for the Tron ecosystem.  It allows users to easily buy and sell TRC10 and TRC20 cryptocurrencies.

The platform has a single ANTE exchange pair with the trading volume has reached eight million TRX already. TronTrade has great potential, getting a comparison with platforms like GOC and trx.market. The high transaction volumes might be due to the ANTE trading event that rewards users with one million TRX. The event is still ongoing and set to bring more users on board.

It is an innovative decentralized application game. ALLBET seeks to create a guessing service ecosystem that is fair and verifiable across different platform.

It seeks to solve challenges with common gambling games by utilizing the mainstream public-chain network such as TRON, EOS and Ethereum.
ALLBET has excited gamblers with what it promises to offer. This platform wants to bring sanity by solving common challenges such as security and convenience. 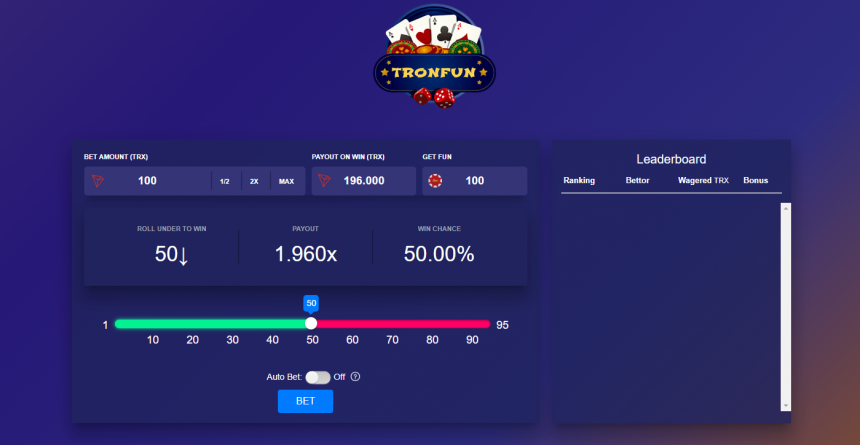 TonFun is a decentralized application based on the Tron network. It provides users with various games. The games are able to remit dividends to fun holders. What makes TronFun stand out is the plan to release ongoing games weekly. The games benefit both users and players. Right now, there are over 1,000 active users and a trading volume of over 750,000 TRX per day .

TronFun allows you to stake the FUN token, but they don’t offer too many information  about it. This is a new project so for more details you can join their telegram. 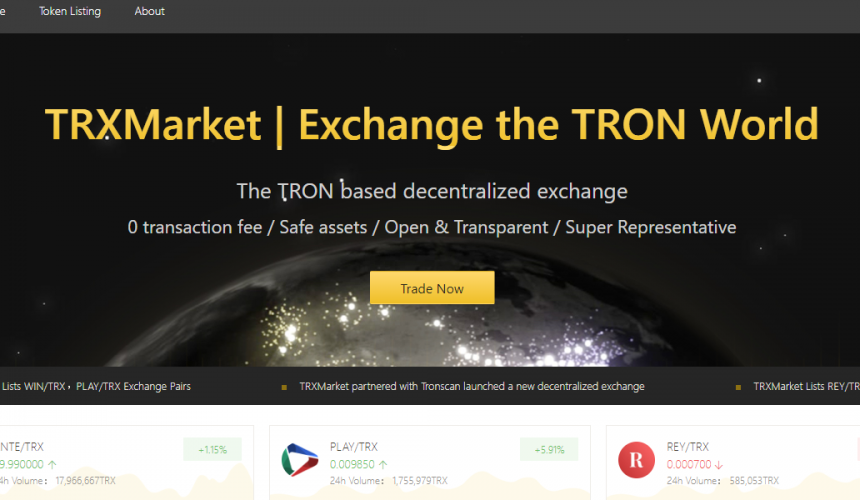 TRX Market records an average of 800 active users in a span of 24 hours. Within the same period, TRX Market averagely records a trading volume of  12.5 Million TRX with the number of transactions standing at 6,200. The platform is clean and easy to use. Eight certain tokens created on TRX can be traded on TRx Market: ANTE, PLAY, REY, DICE, TWJ, FUN, BET, WIN.

888 TRON is another gambling platform built on the TRON network. Developers want to change the gambling scene by allowing users to be co-owners. This is a promise of high profitability for any interested parties.

In 2019, the platform is projected to grow its customer base by getting permits worldwide. Developers want to use legal means in popularizing the platform. It has already launched the dividends, ,that people can be a part of and get a profit

The platform has an average of 200 active users in 24 hours with a trading volume of 2.45 million TRX. 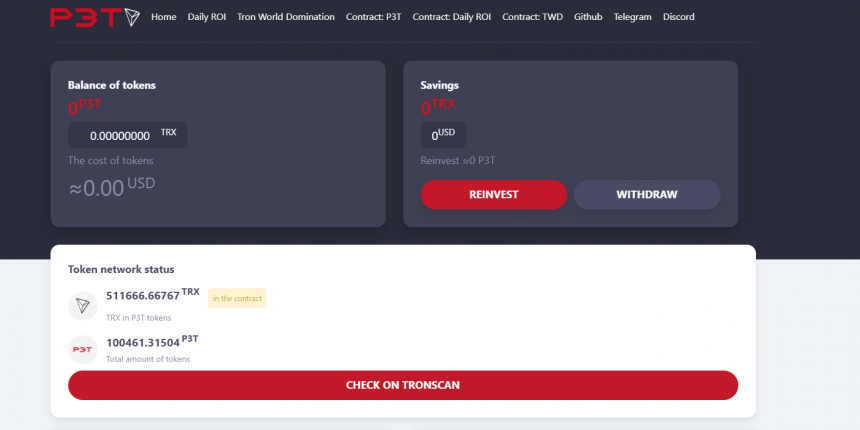 It is a basic fomo game anchored on the P3T tokens. It enables users to buy, sell and receive dividends in tokens available on the platform. Users have the capability of issuing dividends for other games. The P3T claims to be a game of strategy built on the Tron blockchain. The rules are pretty simple. There are 106 countries, each costs 50 TRX. If someone purchase the country’s ownership, the next person should pay 1.6x for the price the first person purchased. Not such a strategy game in our opinion, but if you like this type of games, you could give it a try.

Attention: The game claims to offer 3.33% everyday for its investors. We strongly recommend you to stay away from this as DappRadar.com ranked P3T number five of the high-riskk game investment.

Sidechain Paper by Cardano to be Highlighted at Cybersecurity Security Conference