November 2021 was the last month with large gains for virtual currencies. Most digital assets started a bear trend at that time, which continues until today. Some altcoins have even dropped by over 90%, which shows the strength of this bear market.

Nonetheless, there are some projections that see VTC moving higher in the future. Some analysts consider that there might be good buying opportunities for Vertcoin.

What is Vertcoin (VTC)?

Vertcoin is a relatively-old virtual currency that has been in the market for many years now. This coin and crypto project is known for being ASIC-resistant, making it easier for users to mine and get access to. Usually, this gives more decentralization to the underlying blockchain network. Vertcoin was created as a hard fork of the Litecoin blockchain.

This digital asset can be used for many different things. Users can send and receive transactions using VTC coins and also speculate on its price. Hence, this is a fast and cheap cryptocurrency that lets you send and receive transfers without having to be worried about mining centralization.

Several virtual currencies such as Litecoin (LTC), Tron (TRX) and XRP, have been used by people from all over the world to process cheap and almost instant transactions. Thanks to this demand for altcoins that would be cheaper than Bitcoin or Ethereum to process financial transactions, VTC became one of the best options for investors.

At the end of 2021, Vertcoin experienced its second halving event (December) that reduced mining rewards from 25 VTC per block to 12.5 VTC per block. This was a highly anticipated event by the community. However, the impact on its price was quite limited. Halving events tend to be bullish as the new issuance of the underlying asset gets reduced. 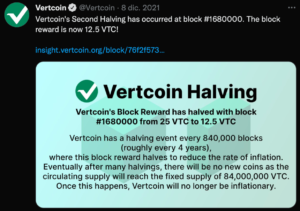 One of the focuses of the Vertcoin community is linked to its GPU-mining capabilities. Rather than requiring ASIC miners (which can be costly and difficult to ship to many countries), GPU mining is cheaper, less expensive, and it offers a unique way for the community to become even more decentralized than other blockchain projects.

As you can see in the chart below, the price of this virtual currency reached the top in December 2021 after its halving event. Therefore, we see that there was strong selling pressure from investors after the halving event. This is something that we have seen for other virtual currencies as well in the past, including Bitcoin and Litecoin.

The negative thing about that is that the sell-off coincided with the beginning of the bear market for virtual currencies, making it more difficult for Vertcoin to face the current market conditions.

Vertcoin (VTC) Price Prediction – How much can VTC price increase in 2022?

Let’s also analyze what TradingView traders believe could happen with this virtual currency when it comes to technical analysis. This information, combined with fundamentals, would help us have a clearer idea of what could happen to Vertcoin price in the coming years.

VTC/USD – Major Breakout! Price Doubled. What is going on? 👇 by DU09 on TradingView.com

VTC/USD – Major Breakout! Price Doubled. What is going on? 👇 by DU09 on TradingView.com

2. DU09 decided to conduct technical analysis for Vertcoin on April 17, before the recent market crash that digital assets experienced with the fall of the Terra (LUNA) ecosystem. He talked about how VTC started to move higher due to some rumours about being listed on some exchanges.

Vertcoin – Road to 10 dollar? by Legenden17 on TradingView.com

3. Legenden17 has also noticed how Vertcoin experienced a move higher in mid-April. He showed that the virtual currency was inside a falling wedge and it has been traded quite well inside its boundaries. Now, the coin is trying to enter once again to this wedge and try to break higher.

Vertcoin prediction by rssrong on TradingView.com

4. April was a very positive month for Vertcoin. Rssrong explains that there could be a possibility for Vertcoin price to hit €1.80 in 2023. The virtual currency has been doing quite well and it could continue in this way in the future despite the recent market sell-off.

5. We finally have this long-term analyst that believed that it was possible for VTC to be rejected from its 200 MA. This is what happened in 2021 and continued throughout 2022. Now, VTC is being traded at close to $0.17 per coin.

What can you do with VTC token? What is the token utility of VTC?

Vertcoin is a unique virtual currency that has been in the market for several years and that allows for cheap and fast transfers between individuals. This is Vertcoin’s main utility. But there are many other features that we have already addressed in this Vertcoin price prediction guide.

VTC has been a way for individuals that wanted to get access to a decentralized blockchain to do so with GPU mining. Vertcoin continues to promote the one-click miner that makes it possible for crypto lovers to get access to one of the most decentralized and fairly distributed virtual currencies in the market.

Let’s also not forget that Vertcoin has no pre-mine and there was no Initial Coin Offering (ICO) or airdrop. Therefore, its coins have been fairly distributed among individuals that wanted to protect this network and perform fast, cheap and reliable transactions.

What would be a decent VTC Price prediction for 2022?

We have seen that the first half of 2022 brought different challenges to virtual currencies. The ability for Vertcoin to face these challenges would be a key thing for this digital currency. After reading different opinions and experts that analyzed VTC price, we believe that it might be possible for this digital currency to hit $0.30 in the coming months. That would represent close to a 100% increase from current prices.

The above Vertcoin price prediction would take place if the market starts recovering in the second half of the year. However, if the bear market continues, we could see VTC moving closer to $0.10 and eventually breaking below this price level. Therefore, we should pay close attention to the whole market direction in the coming months.

Yes, VTC could definitely reach $1 in the future. Why could this happen? This can happen due to the fact that this virtual currency was already traded above $1 in the past. Several altcoins were able to recover from bear markets and start new trends towards higher prices. Therefore, VTC could be headed towards $1 if the crypto market starts moving higher in the coming months and years.

Based on the estimations, here are the following price predictions for VTC.