Bitcoin (BTC) is, undoubtedly, the king of the cryptocurrency market, and since that is the case, we are bringing you a full overview of the Bitcoin halving history.

What is Bitcoin Halving?

The first thing that needs defining is what Bitcoin halving really is? Bitcoin halving is when rewards given to miners for securing the network are cut down by 50%. Halving happens every 210,000 blocks (approximately every 4 years). Currently, a reward for solving a Bitcoin block (every 10 minutes) is 12,5 BTC. After the next halving, the reward will be 6,25 BTC for each block mined.

By implementing halving, Bitcoin’s code secures its ecosystem against overwhelming inflation. Reducing the mining rewards means that scarcity remains ever present regarding the most popular crypto asset in the market. That way, Bitcoin remains more similar to gold than fiat currencies as the amount of gold and BTC remains pre-defined, contrary to fiat currencies printed by central banks. With every BTC halving, the next Bitcoin is harder to obtain.

It has been calculated that, as the halvings continue, the last BTC for a mined block will be rewarded by the year 2140.

When was Bitcoin Last Halving?

Considering the fact that the price of BTC currently fluctuates around $10,000, we can easily calculate that, after the last halving, the price of Bitcoin has increased by 1485.84%.

In order to explain the significance of the upcoming event, we will present you with a full Bitcoin halving chart, dates and thorough explanation of the price movement following every halving. 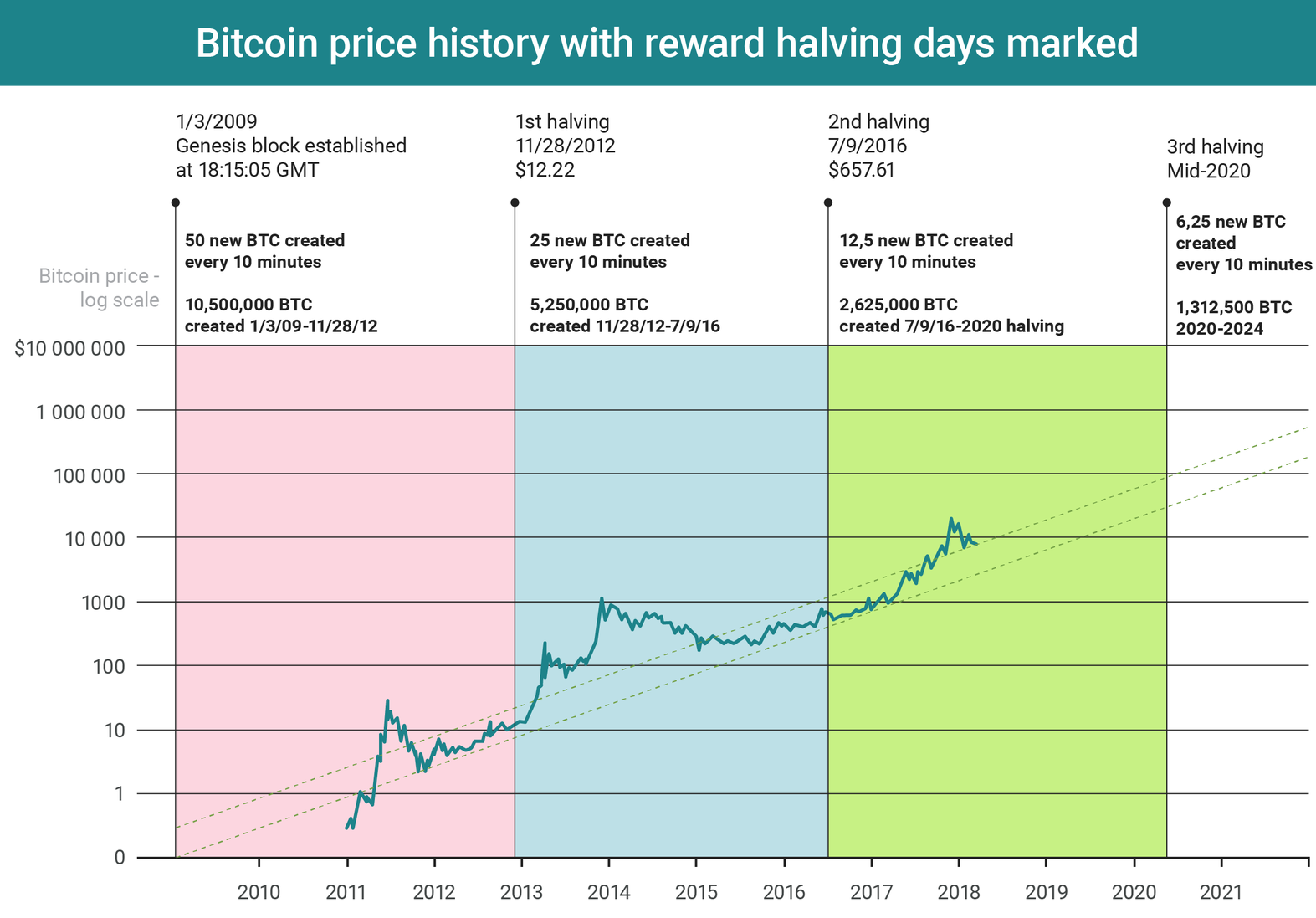 As can be seen in the chart above, since the genesis block was mined on January 3rd, 2009, each following halving had interesting aftermath. Every time the mining reward was halved, the price of BTC failed to immediately react in a way that Bitcoin would hit its new all-time high. Instead, it took time for the market to realize new conditions set by the new level of scarcity of its main asset.

Comparing that with the Bitcoin halving in 2012, we can see that after the first halving, BTC took a slightly quicker arch to a new all-time high at the time ($1,149) spending 1 year and 3 days to achieve it.

When is the next Bitcoin Halving Scheduled?

Analogically, the next Bitcoin halving is scheduled for block 630,000, which is estimated to be mined on May 17th, 2020, cutting down the mining rewards to the previously quoted 6.25 BTC per block.

Remember, the date is only an approximation of when the halving will transpire following a simple equation:

Now that we have established the estimated date of Bitcoin halving in 2020, it is time to see what will be the outgrowths of this event in the cryptocurrency market.

As we already stated, the cryptocurrency market isn’t quick to respond to Bitcoin miners’ rewards being lowered. In fact, as we previously presented, the last two halvings have shown that every time the network undergoes such an event, investors are slower to react.

So, are we to expect another all-time high in a post-2020 halving era?

The truth is that nobody knows. However, history has taught us that after BTC halvings, the volatility gets much higher as an answer to the newly established lower influx of BTC in the market which, in turn, may lead to the price rally. The only certain thing is what was pre-programmed into the very core of the Bitcoin’s code – miners’ rewards are going to be lowered by 50%.

Lastly, keep in mind that it is estimated that around 30% of all the existing Bitcoin have been lost due to users’ negligence, owners’ deaths, hardware breakage without backed private keys, etc, making the asset even more scarce.

It is well-known how the market usually reacts to scarcity. It remains to be seen how it will react this time.